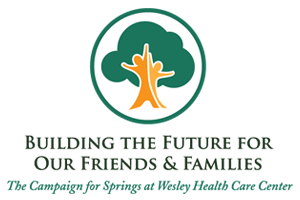 Today marked a historic occasion for The Wesley Community, as we publicly announced our first capital campaign in more than 40 years to help transform floors 2, 3 and 4 of the Springs Building. The 1st phase of renovations to 5 Springs, completed in 2016, has been well received by residents and families and we are now raising funds to fulfill our commitment to complete the renovations to the entire Springs building. This is a capital project that will be an investment of more than $20 million dollars when complete. Building The Future For Our Friends and Families: The Campaign for Springs seeks to raise $5 million dollars to help support the cost of the project.

A full press release with today’s announcement is available here.

Support the Campaign for Springs