Home » News » Presentation on The Burning of The Piping Rock 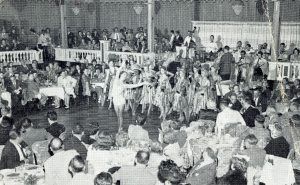 Last Friday, November 8, the residents at Woodlawn Commons, part of the Wesley Community in Saratoga Springs, had me as their guest to give a presentation on The Burning of The Piping Rock. What a great group they were! Several had been to Piping Rock Casino in its glory days. They discussed how much they enjoyed dancing to the big bands at Piping Rock Casino and watching the hit stars, such as Sophie Tucker, Hildegarde, Kay Thompson and the Williams Brothers. (In those post WW II days, Andy Williams performed as one of the Williams Brothers.) When I showed them this photo of the entertainment revue at Piping Rock Casino, and other photos, they gasped in recognition of those times long ago. Thanks to Gina Mergel for the invitation to speak at Woodlawn Commons!