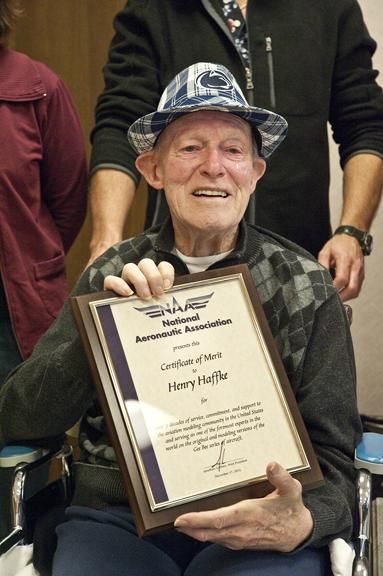 Henry Haffke likes to fly with his feet on the ground. That’s one of the benefits of being a model aircraft aficionado.

The longtime Malta resident was honored Wednesday with a Certificate of Merit from the National Aeronautic Association for his years of designing, researching and writing about model aircraft.

Malta Supervisor Paul Sausville presented the award to Haffke at Wesley Health Care Center in Saratoga Springs.
Haffke fell in love with aviation while growing up in Springfield, Mass., where he spent summer evenings at a nearby airfield, watching with amazement small planes coming and going overhead.

“It was cheap entertainment when you couldn’t afford 10 cents for a movie,” he said in a recent interview. “There were always airplanes flying overhead. I started building models, with my father’s help, when I was 5 or 6.” Haffke had earned his pilot’s wings by the time he was 15.

At 17, Haffke joined the Navy toward the end of World War II and went to aviation ordnance school in Oklahoma. He then became an instructor, teaching air crewmen in Jacksonville, Fla.

As a hobby, he made airplane models in the service and the interest took off from there.

Today, Haffke is widely regarded as the world’s foremost authority on Gee Bee aircraft, named for the Granville Brothers, who manufactured them in Springfield.

His prized possession is a red and white one-sixth scale replica of a Gee Bee Model-A. The real, full-size airplane featured unique innovations and was quite historic. It was the first plane with side-by-side seats instead of one behind the other so that teachers could talk to students while flying.

However, Gee Bees were widely regarded as dangerous. Haffke thought the reputation was false and wanted to set the record straight. After extensive and diligent research, he published “Gee Bee — The Real Story of the Granville Brothers and Their Marvelous Airplanes.”

A noted aviation author and historian, Haffke has written for a variety of model aircraft magazines, created numerous model aircraft designs and is an accomplished museum scale builder. He is enshrined in the Academy of Model Aeronautics Hall of Fame in Muncie, Ind., that includes such notables as Neil Armstrong, the first man to walk on the moon.

Haffke never forgot the experiences of his youth and what model aviation means to him. He has continued to attend many local aeromodelling events, where he’s shared his knowledge and passion for model aviation with children and adults alike. He’s used such opportunities to explain how the hobby is a doorway to careers in science, math, engineering and aviation.

The Academy of Model Aeronautics, founded in 1936 during the Golden Age of Aviation, represents more than 155,000 aeromodelers in 2,400 clubs throughout the United States, Guam and Puerto Rico. The organization sanctions more than 2,000 events annually for recreation, sport and scientific pursuit.