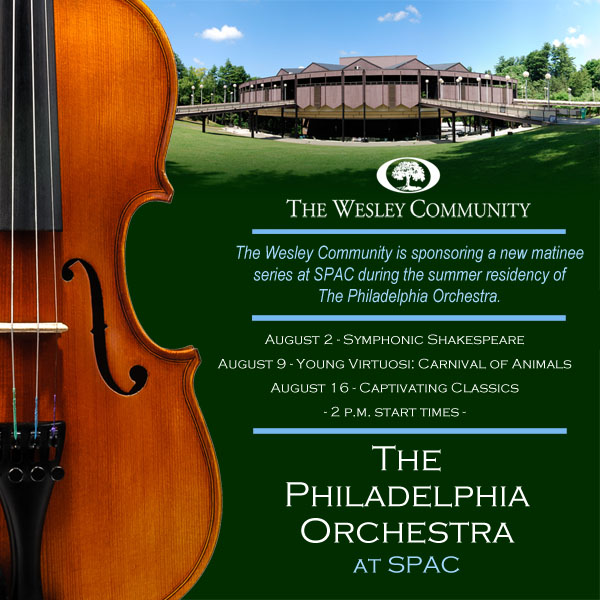 The Wesley Community is sponsoring a new 2 pm matinee series at the Saratoga Performing Arts Center (SPAC) during the summer residency of The Philadelphia Orchestra. The orchestra’s residency runs from August 1 – 16 and features a wide variety of programs and special events for music lovers and families. Learn more below and visit the Saratoga Performing Arts Center Calendar for more details and tickets.

Opening Night of The Philadelphia Orchestra’s August residency will continue the new tradition of featuring Tchaikovsky’s famed 1812 Overture, complete with fireworks, live cannon fire and dancers from Pennsylvania Ballet, as the kick-off to the 2018 orchestra season.

As part of SPAC’s new Thursday Matinee series, Stéphane Denève will lead a “Symphonic Shakespeare” program of popular orchestral music set to Shakespeare’s most illustrious works. Pieces by Tchaikovsky, Walton, Berlioz, and Mendelssohn will underscore excerpts performed by guest actors of Shakespeare’s most beloved plays, such as Romeo and Juliet, A Midsummer Night’s Dream, and As You Like It. Pre-Performance Talk, 1pm

Carnival of the Animals is a humorous musical suite of fourteen movements by the French Romantic composer Camille Saint-Saëns. Accompanied by accessible commentary, alongside projections of animal drawings submitted by local children, attendees are invited to follow each section of Saint-Saëns’ classic piece while they listen. Young, virtuosic “piano brothers” Lucas and Arthur Jussen will perform alongside the Orchestra following their debut performance the previous evening. This matinee performance has pre-event festivities starting at 1 p.m. that are fun for the whole family, including free ice cream from Stewart’s Shops, balloon artists and more!

The final orchestra matinee of the season will feature David Kim, concertmaster of The Philadelphia Orchestra, and Choong-Jin (C.J.) Chang, principal viola of The Philadelphia Orchestra, for an evening of “Captivating Classics.” Kicking off the afternoon is the festive Overture to William Tell, irrevocably remembered for its exciting final three minutes, which came to serve as the theme music for the Lone Ranger programs in movies and on radio and television.